Do you like your job? Love your boss? Truly believe you’re part of a team?

Well, for the employees of the Café Nova in Bozeman, Montana, their dedication goes above and beyond the call of duty.

More than 30 of the café’s current and former employees have gotten a tattoo of a bacon and eggs/skull and crossbones design.

Each tattoo is quite unique. “We were in the kitchen working one day,” owner Serena Rundberg told ABC Fox Montana, “and two eggs and two pieces of bacon landed on a plate in the exact shape of a skull and crossbones. And we were thinking like, ‘Woah, that would make an amazing tattoo.’”

So amazing that Rundberg had an artist create a design and a number of employees decided to get one. The bacon and eggs/skull and crossbones design became the cafe’s logo, appearing on stickers and shirts worn by employees with the tagline “Killer Breakfast”. The image has become so familiar in the community that customers and children have been getting a temporary version of it to proudly show off to their friends.

But isn’t tattooing your employees asking for a bit too much loyalty? Not to some who work there. “When the tattoo idea came up,” one longtime employee says, “I wasn’t even at all ashamed to be like, ‘Yeah!’ I loved the owners. I didn’t even think twice about it.”

It’s not a pre-requisite to work there, the employees obviously don’t have to get tattooed, but many of them do. And if they choose to, the café will pay for it.

Each tattoo is designed specifically for the person who gets it, with one showing eggs and bacon “flying triumphantly on a pirate ship’s flag” while others include images of waffles, hats, cigarettes, roses and frying pans.

The restaurant owners and its employees have emphasized the team-building feeling and sense of community they get when they share the tattoo.

Whatever the case, everyone there seems to be having fun and entrepreneur Rundberg’s tattoo idea is even spreading to some of the other small businesses she owns. “I never thought that we would create something like that, but we’ve created something that is more than a job,” she says. “More than a career.” 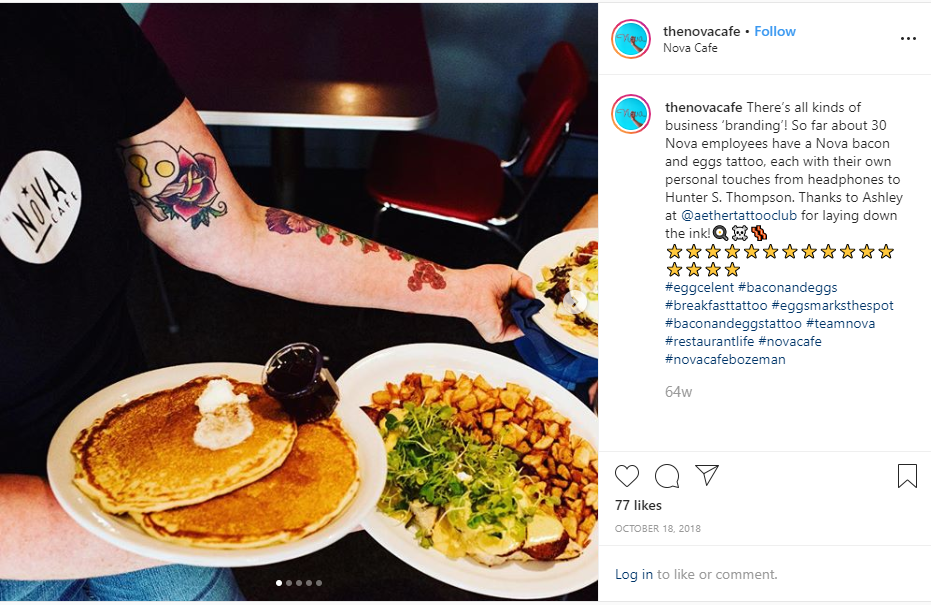